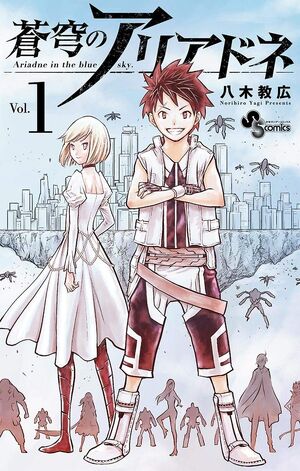 Ariadne in the Blue Sky, 蒼穹のアリアドネ

Ariadne in the Blue Sky (蒼穹のアリアドネ, Sōkyū no Ariadone?) is a Japanese manga series written and illustrated by YAGI Norihiro.

The manga centers around a certain boy who lives alone away from people, but harbors a special dream. One day, he meets a lone girl, and the story begins as he becomes part of the girl's destiny.

Chapters not yet in tankōbon formatEdit

Retrieved from "https://soukyuu-no-ariadne.fandom.com/wiki/Soukyuu_no_Ariadne_(manga)?oldid=1002"
Community content is available under CC-BY-SA unless otherwise noted.